I’ve loved hiking in the woods ever since my Aunt Ree took me on my first walk in the woods as a small child. It felt like I entered a brand new world – a magical world of trees, moss and animals. A world apart from my normal everyday life, which was far from magical and far from peaceful. I still remember having my peanut butter and jelly sandwich with her on a stop along the trail. It was the most peace I had ever felt. Still today, I find solace in the woods, and hike as often as possible.

Tomorrow I am taking a class in Shinrin-Yoku –  or “forest bathing”.  I already KNOW how great I feel after being in nature, hiking, kayaking, walking – but I’m excited to learn more about the health benefits of forest bathing from a scientific standpoint. Below is a great article written by Karin Evans and published in the Greater Good Magazine.

I’ve also added a quick 1 minute video (scroll down to the bottom) for those who don’t have the time to read the article; i.e. those of you that would probably benefit from a great forest bath  😉

Why Forest Bathing Is Good for Your Health

Though any kind of nature can enhance our health and happiness,
there’s something special about being in a forest.

“Nature deficit disorder” is a modern affliction. With more people living in cities, working in high-rise office buildings, and becoming addicted to their innumerable electronic devices, many of us are indeed experiencing a nature deficit. This is true for children and adults alike.

In his new book, Forest Bathing: How Trees Can Help You Find Health and Happiness, Japanese medical doctor and researcher Qing Li presents some sobering statistics: By 2050, according to the United Nations Population Division, three quarters of the world’s people will live in cities. Even now, the average American spends 93 percent of the time indoors, and some ten hours a day on social media—more than they spend asleep.

The Kumano Kodo trail in Japan

In Japan, there’s enough awareness about this deficit that Li heads up an organization called The Japanese Society of Forest Medicine, which promotes research on the therapeutic effects of forests on human health and educates people on the practice of forest bathing. His book—a companion to the center he runs—explores research on these benefits, while offering a number of techniques we can use to enhance them.

The history of forest bathing

Japan is a country that is both urbanized and heavily forested. Trees cover two-thirds of the island’s landmass, and yet a majority of Japan’s people live in crowded city conditions. Li himself lives in Tokyo, a city he describes as “the most crowded city in the world.”

Perhaps that’s why the art of “forest bathing”—shinrin-yoku—began there. Forest bathing involves slowly walking through a forest, taking in the atmosphere through all your senses, and enjoying the benefits that come from such an excursion.

In 1982, Japan launched a national program to encourage forest bathing, and in 2004, a formal study of the link between forests and human health began in Iiyama, Japan—a place particularly known for its lush, green forests. Now, each year upwards of 2.5 million people walk those forest trails as a way to ease stress and enhance health.

Li’s interest in forest research began when he was a stressed-out medical student. He went away for a week of forest camping, and found it restored his physical and emotional health. That inspired him to begin researching the benefits of forests on human health and well-being. In 2004, he helped found the Forest Therapy Study Group, aimed at finding out why being among trees makes us feel so much better.

The healing power of the forest 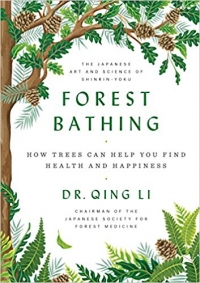 Forest Bathing: How Trees Can Help You Find Health and Happiness (Viking, 2018, 320 pages)

After years of careful study, Li has found that spending time in a forest can reduce stress, anxiety, depression, and anger; strengthen the immune system; improve cardiovascular and metabolic health; and boost overall well-being.

“Wherever there are trees, we are healthier and happier,” writes Li. And, he adds, it isn’t about exercising—like hiking or jogging—it’s simply about being in nature.

Why would this be? It’s long been recognized that humans have a biological need to connect with nature. Some 20 years ago, American biologist E. O. Wilson noted that humans are “hardwired” to connect with the natural world, and that being in nature had a profoundly positive effect on human health.

Li’s research seems to corroborate this. For example, one of his studies looked at whether forest bathing could improve sleep patterns among middle-aged Tokyo office workers who tended to suffer sleep deficiency due to high levels of stress. During the study, participants walked the same amount of time in a forest that they usually did in a non-forest setting on a normal working day. After a walk in the forest, participants were significantly less anxious, slept better, and slept longer. In addition, researchers found that afternoon walks were even more beneficial than morning walks.

“You sleep better when you spend time in a forest, even when you don’t increase the amount of physical activity you do,” reported Li.

To further assess the effects of time spent in a forest, Li measured people’s moods before and after walking in the woods or in an urban environment. While other studies have shown that walking anywhere outdoors reduces depression, anxiety, and anger, Li found that only the experience of walking in a forest improved people’s vigor and reduced fatigue.

The health secrets of trees seem to lie in two things—the higher concentration of oxygen that exists in a forest, as compared to an urban setting, and the presence of plant chemicals called phytoncides—natural oils that are part of a plant’s defense system against bacteria, insects, and fungi. Exposure to these substances, says Li, can have measurable health benefits for humans. Physiological stress is reduced, for example, and both blood pressure and heart rate are lowered. Evergreens—pine, cedar, spruce, and conifers—are the largest producers of phytoncides, so walking in an evergreen forest seems to have the greatest health benefits.

How to do forest bathing

So, is there a specific art to forest bathing? Or is it just as easy as a walk in the woods?

Connecting with nature is simple, writes Li. “All we have to do is accept the invitation. Mother Nature does the rest.” Here are some of his suggested steps.

Find a spot. Depending where you are, find a good source of nature. One doesn’t need to journey deep into a forest for these benefits. Just look for any green area. It could be an urban park, a nature preserve, or a trail through suburban woods. Forests with conifers are thought to be particularly beneficial.

“Let your body be your guide. Listen to where it wants to take you,” Li says. Some people will respond to sunny glades, others to shadier places. Listen to your own wisdom. For people who don’t have access to a forest, or can’t get outside for some reason, infusing essential tree oils in your home can provide benefits, too.

Engage all your senses. “Let nature enter through your ears, eyes, nose, mouth, hands, and feet,” says Li. Actively listen, smell, touch, and look. “Drink in the flavor of the forest and release your sense of joy and calm.”

Don’t hurry. Slow walking is recommended for beginners. And it’s good to spend as much time as possible. You’ll notice positive effects after twenty minutes, says Li, but a longer visit, ideally four hours, is better.

Try different activities. Try doing yoga in the woods, or Tai chi, or meditation. Take a picnic. Write a poem. Study plants. You can venture alone, or with a companion. In Japan, forest walking therapists are even available.

Appreciate the silence. One of the downsides of urban living is the constant noise. If you’re lucky, you’ll find a wooded area that’s free from human-produced sound. Silence is restorative, and a forest can have its own healing sound—rustling leaves, a trickle of water, birdsong. Spend a few quiet moments with a favorite tree. If nothing else, when we connect with nature we are reminded that we are part of a larger whole. And that, Li notes, can lead us to be less selfish and to think more of others.

Li’s book, which includes illustrations and a map of “40 Beautiful Forests Across the World,” is an invitation and an inspiration to take a walk in the woods, wherever you are.

VIDEO:  What is Japanese Forest Bathing and How Can It Improve Your Health?

This site uses Akismet to reduce spam. Learn how your comment data is processed.